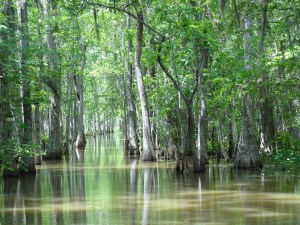 FREETOWN, La. (CN) – “The trees are dying, the grasses are dying. The birds we have are all crows – no hummingbirds left, no songbirds,” a lifelong resident of Freetown, Louisiana, said as Hurricane Nate approached and plans continued to build a controversial oil pipeline that will end nearby.

Opponents of the pipeline, now that it has received the go-ahead from the Louisiana Department of Natural Resources, are urging the state to require the company building it to conduct an environmental impact statement for the land it traverses.

Freetown and St. James Parish, between Baton Rouge and New Orleans, are known as Cancer Alley. It is an area with a heavy concentration of industrial plants. The parish — Louisiana’s version of a county — has a population of about 2,000, most of them black.

Sitting on a sliver of land along the Mississippi River about 50 miles upstream from New Orleans, Freetown was established 145 years ago by freed slaves.

“They were family people, coming together as neighbors and friends,” a resident of the community whose family has lived in Freetown from its inception told the Washington Times in 2014. “They made gardens and everybody shared their gardens. They reached out and helped each other. They didn’t have that much.”