Dairy famers under siege as new “milks” keep appearing
NBC News
— Perfect Day Foods is one company creating a synthetic milk alternative. It’s similar to milk in that it consists of casein and whey, the proteins found in milk. However, a cow was never used to produce their product. Instead, the animal-free dairy product is made in a lab using genetically engineered yeast programmed with DNA to produce the same proteins found in cow’s milk.

Trump aides ignored legal peril in pushing Saudi reactor plan
Reuters
— Top White House aides ignored repeated warnings they could be breaking the law as they worked with former U.S. officials and a close friend of President Donald Trump to advance a multi-billion-dollar plan to build nuclear reactors in the Middle East, Democratic lawmakers alleged in a report released Tuesday.
— The House of Representatives Oversight Committee report said former national security adviser Michael Flynn and two aides promoted the plan with Tom Barrack, the chairman of Trump’s inaugural committee, and a consortium of U.S. firms led by retired military commanders and former White House officials.
— The effort, the report said, began before Trump took office and continued after his inauguration in January 2017 despite National Security Council staff warnings that a proposed transfer of U.S. nuclear technology to Saudi Arabia was being fast-tracked around a mandatory approval process in possible breach of the Atomic Energy Act.

Honda’s the latest to jump off HMS Brexit
AP
Bye bye to at leat 3,500 jobs.

Inside the push to replace farm workers with robots
WaPost
— Both human and machine have 10 seconds per plant. They must find the ripe strawberries in the leaves, gently twist them off the stems and tuck them into a plastic clamshell. Repeat, repeat, repeat, before the fruit spoils.
— One February afternoon, they work about an acre apart on a farm the size of 454 football fields: dozens of pickers collecting produce the way people have for centuries — and a robot that engineers say could replace most of them as soon as next year.
— The future of agricultural work has arrived here in Florida, promising to ease labor shortages and reduce the cost of food, or so says the team behind Harv, a nickname for the latest model from automation company Harvest CROO Robotics.

W. Virginia teachers on strike again
NPR
— West Virginia public school teachers are striking over a new bill that paves the way for charter schools and private school vouchers in a state that relies primarily on public education.
— In anticipation of the strike, almost all of the state’s 55 public school systems have canceled classes for Tuesday.
— The state’s House of Delegates and Senate have been going back and forth on different versions of a bill that would overhaul West Virginia’s educational system. According to the Charleston Gazette Mail, the education bill raises pay for teachers and increases funding for public schools, but also permits the creation of charter schools in the state, which currently has none.

Senator calls out newspaper editor who proposed using the KKK to “clean out” DC
Fox News
— Sen. Doug Jones, D-Ala., called on the editor of a small Alabama newspaper to resign Monday after publishing an editorial last week that called for the Ku Klux Klan to “night ride again” and “clean out D.C.”
— Goodloe Sutton, the editor and publisher at the 3,000-circulation Democrat-Reporter, toldThe Montgomery Advertiser that he penned the Feb. 14 column. The report said that he doubled down on the piece, and said, “We’ll get the hemp ropes out, loop them over a tall limb and hang all of them.”

HIS EDITORIAL VERBATIM:
“Time for the Ku Klux Klan tonight ride again.
Democrats in the Republican Party and Democrats are plotting to raise taxes in Alabama.
They do not understand how to eliminate expenses when money is needed in other areas. This socialist communist ideology sounds good to the ignorant, the uneducated, and the simpleminded people.
People who do not understand the constitution do not like to be responsible.
Slaves, just freed after the Civil War, were not stupid. At times, they borrowed their former masters’ robes and horses and rode through the night to frighten some evil doer. Sometimes they had to kill one or two of them, but so what.
This is the same so what used when Democrats got us into World War I and World War II. Then they got us fighting in Korea. Next when the industrial northeast wanted more money, they got us in the Vietnam war, and now in the Middle East war.
If you haven’t noticed, they did away with the draft so their sons would not have to go into battle.
Seems like the Klan would be a welcome to raid the gated communities up there they called him compounds now.
Truly, they are the ruling class.”

Gunshot nation:
Former NFL player killed in dispute over parking space
Yahoo News
— Police have arrested 31-year-old Marcus Johnson on a first-degree murder charge, according to the Denver Post. Johnson reportedly told investigators that his neighbor, T.J. Cunningham, had attacked him earlier in the day, and the two men met near the high school to settle their dispute over a parking spot. According to ABC 7 in Denver, the feud between Cunningham and Johnson had been ongoing.
— Cunningham played at Colorado from 1992-1995, and recorded 239 yards on 21 receptions as a wide receiver. He was selected by the Seattle Seahawks in the sixth round of the 1996 NFL draft. He only played in nine games, however, before injuries ended his career. He was working as an assistant principal at Hinkley High School in Aurora.
>>> Michigan shooting leaves 3 children, 1 adult dead (UPI)
>>>Illinois State Police wrongly issued gun license to Aurora shooter (Chicago Tribune)
>>> Father spinning gun on finger shoots self at daughter’s birthday party

Another take on why Amazon abandoned NY plan:
Fear of unions
The American Prospect
“Everyone knows the history of Amazon across the world, their labor relations and how they treat their workers—it’s notorious,” said George Miranda, the top Teamsters official in New York. “Now that they were coming into New York, the most progressive, union-heavy state, we were looking for neutrality where they would not fight unionization.”

North Carolina
A “coordinated” and “unlawful” election fraud put GOP candidate in
HuffPo
— The executive director of the North Carolina State Board of Elections revealed Monday that state officials had uncovered a “coordinated” and “unlawful” effort to collect absentee ballots on behalf of a Republican congressional candidate in the November election.
— Kim Strach made the comments at a closely watched public evidentiary hearing in Raleigh on Monday following a monthslong investigation into election irregularities in the state’s 9th Congressional District. The state board declined to certify the race last November and could order a new election after the hearing. Republican Mark Harris currently leads Democrat Dan McCready by 905 votes in the race.

Roger Stone posts pix of judge in his case, along with crosshairs
Newsweek
— Roger Stone shared a since deleted conspiratorial post to Instagram on Monday including a photo of Judge Amy Berman Jackson, who will preside over his case, with what appeared to be a crosshairs above her head. 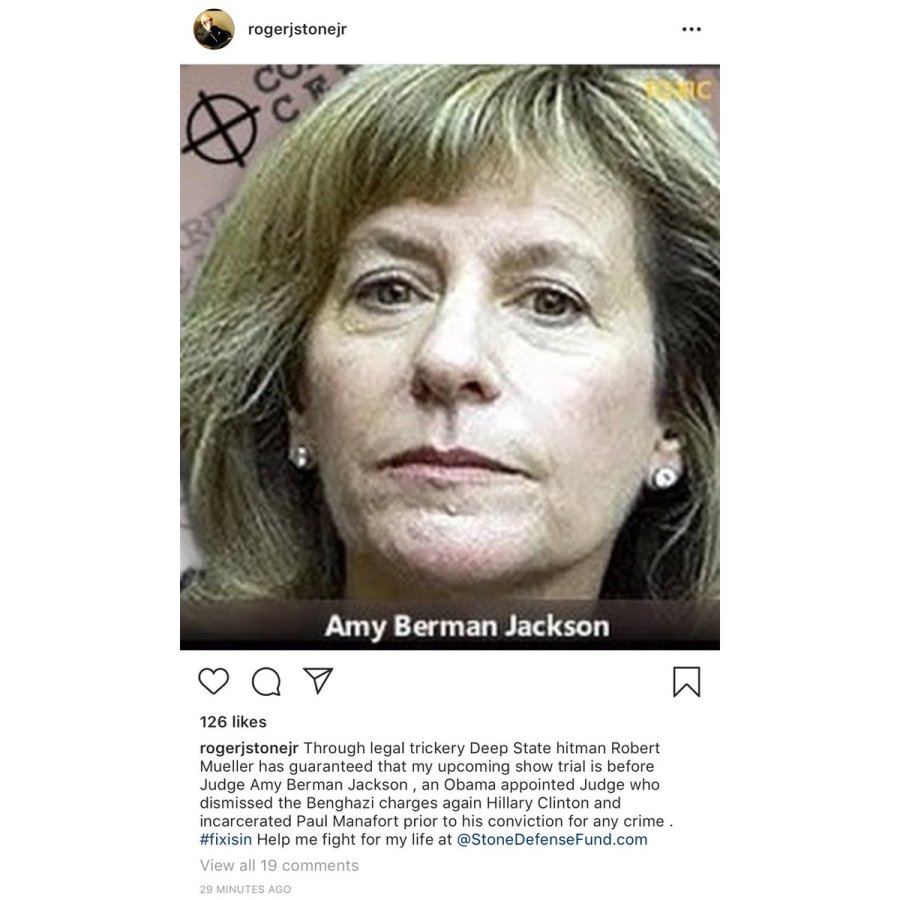