Ford warns “hard Brexit” may cause it to leave UK
BBC
“We will take whatever action is necessary to preserve the competitiveness of our European business.”
–> 13,000 jobs at stake.

Andrew McCabe says officials discussed removing Trump after Comey firing
The Guardian
— Former acting FBI director Andrew McCabe has said top Trump administration officials talked seriously about removing Donald Trump from office just months after he become president.
— McCabe, who briefly ran the FBI after Trump fired James Comey as the bureau’s director, told 60 Minutes that there were meetings at the justice department in the days following the firing to discuss whether Trump could be removed under the 25th amendment.
… “They were counting noses. They were not asking cabinet members whether they would vote for or against removing the president, but they were speculating this person would be with us, that person would not, and they were counting noses in that effort.”

New study confirms link between Roundup, cancer
The Guardian
— A broad new scientific analysis of the cancer-causing potential of glyphosate herbicides, the most widely used weedkilling products in the world, has found that people with high exposures to the popular pesticides have a 41% increased risk of developing a type of cancer called non-Hodgkin lymphoma.
— The evidence “supports a compelling link” between exposures to glyphosate-based herbicides and increased risk for non-Hodgkin lymphoma (NHL), the authors concluded, though they said the specific numerical risk estimates should be interpreted with caution.

Rockefeller University Hospital knew doctor was sexually abusing thousands of patients, bombshell lawsuit says
NY Daily News
— A prominent doctor molested and sexually abused potentially thousands of his young patients while his research institute employer knew and did nothing, a bombshell lawsuit filed in Manhattan federal court Wednesday charges.
The civil suit, brought by a victim of the late doctor was filed against the Rockefeller University Hospital, which is described in the papers as a “world-renowned research institute.”
— The lawsuit filed by Jeffrey Poppel, a former patient, alleges that during his four decades as a pediatric endocrinologist at Rockefeller, Dr. Reginald Archibald had more than 9,000 patients, many of whom were boys who were unable to grow normally.
— The filing claims Archibald also took nude and pornographic film and Poloroid photos of his victims that were kept at the facility and that Rockefeller staff members “were aware of the photographs and his conduct for many years, and remained silent regarding same.”

Amazon to NY: Drop Dead
The Hill
— “While polls show that 70 percent of New Yorkers support our plans and investment, a number of state and local politicians have made it clear that they oppose our presence and will not work with us to build the type of relationships that are required to go forward with the project we and many others envisioned in Long Island City,” the statement from Amazon said.

Deadly blue ‘Mexican oxy’ pills take toll on US Southwest
AP
— Aaron Francisco Chavez swallowed at least one of the sky blue pills at a Halloween party before falling asleep forever. He became yet another victim killed by a flood of illicit fentanyl smuggled from Mexico into the Southwest — a profitable new business for drug gangs that has pushed the synthetic opioid to the top spot for fatal U.S. overdoses.

Texas Man With 3D-Printed Gun And ‘Hit List’ Of Lawmakers Sentenced To 8 Years
NPR
— Eric Gerard McGinnis was not supposed to have a gun. After a violent altercation with his girlfriend, a Texas judge barred him in 2015 from possessing a firearm. A year later, McGinnis tried to buy a gun anyway, but the purchase wouldn’t go through after a background check revealed the court order.
— So, according to the U.S. Attorney’s Office, McGinnis obtained a barrel, stock, upper receiver and grip — and then used a 3D printer to create the gun’s firing mechanism. He assembled the parts into a short-barrel AR-15 style rifle, and headed out into the woods with what federal attorneys called a “hit list” of Democrat and Republican lawmakers, including their office and home addresses. The list was titled, “9/11/2001 list of American Terrorists.”

Departing Mich. gov. pardoned “career drunk driver”
AP
“The average Joe out there is not going to get a pardon” for the same crime, prosecutor Jessica Cooper told the AP. “Nor should they.” 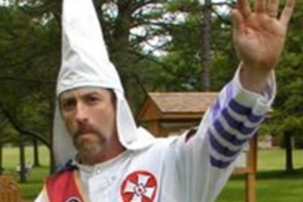 — Frank Ancona, the outspoken imperial wizard of the Traditionalist American Knights of the Ku Klux Klan, was found shot to death Saturday near Belgrade, Mo.
— The body of the 51-year-old Leadwood, Mo., resident was discovered near the Big River by a family fishing in the area, according to Washington County Sheriff Zach Jacobsen in southeast Missouri.
— Washington County coroner Brian DeClue told The Kansas City Star that Ancona died of a gunshot wound to the head.
— “It was not self inflicted,” he said. “This is now a homicide investigation.”
…. The police chief also said that he questioned Malissa Ancona about a Facebook post she’d made the day he disappeared. In the post, she said she was seeking a new roommate. Dickey said Malissa Ancona told him that when her husband left, he said he was filing for divorce when he got home, so she figured she would need a new roommate to help pay the bills.
>>> UPDATE>>> KKK family values: Wife, Son charged in murder

A YEAR AFTER PARKLAND, THE SCHOOL-SECURITY INDUSTRY IS BOOMING
Pacific Standard
— School districts and parents are investing in bulletproof backpacks and whiteboards, security consulting, and safe rooms. But will any of it work?