US military studying insects …. as crop weapon?
The Independent
— Insects could be turned into “a new class of biological weapon” using new US military plans, experts have warned.
–Bugs could be used to disperse genetically modified (GM) viruses to crops under the Insect Allies programme, according to a team that includes specialist scientists and lawyers.

I just reviewed the FBI’s #Kavanaugh report. The FBI never interviewed many relevant witnesses. There are also thousands of pages of leads from the tip line that received no follow up. It’s clear the White House only wanted the FBI to go through the motions & that’s what it did.

√ Oh, whatever the corporations want …
Rail safety rules killed, oil spill fears revived
McClatchy
— The Trump administration has repealed a safety regulation governing trains that carry large quantities of oil, sparking new fears among Washington state officials and environmental activists that devastating oil spills could be more likely.
— The Department of Transportation announced last week that trains carrying flammable liquids such as crude oil and ethanol would no longer be required to install electronically controlled pneumatic braking systems, an Obama-era rule instituted to decrease the chance of train derailments.
— Washington Gov. Jay Inslee, a Democrat, blasted the decision as a “reckless disregard for the life and property of all who live or work along the rail tracks” that transport oil.
–“I fear the day we witness a destructive or deadly derailment that could have been prevented with readily available technology,” he said in a news release. 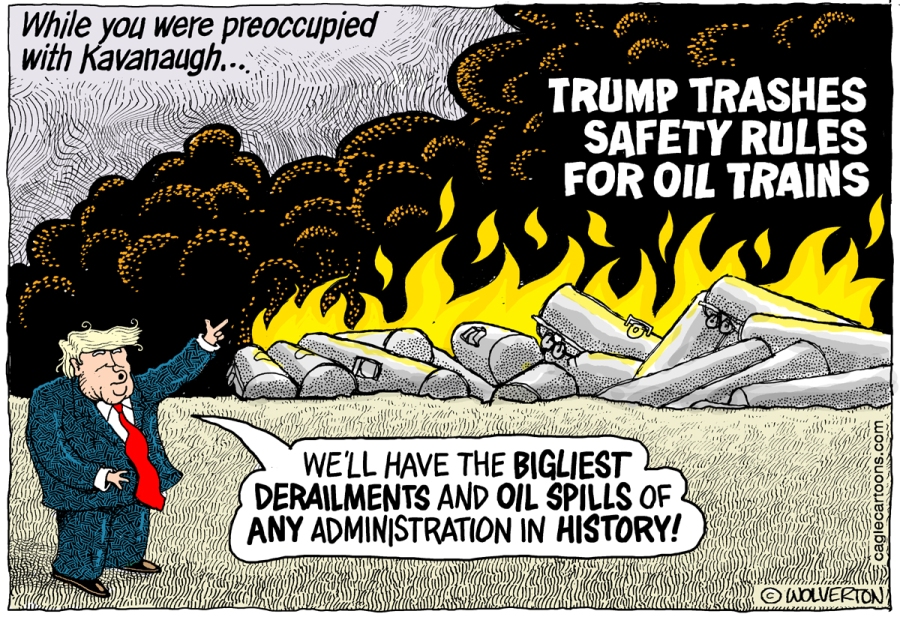 With whitewash complete, every Republican poised to put yet another asshole to Supreme Court
WaPost Opinion
“Investigation that didn’t investigate anything doesn’t find what it wasn’t looking for.”
√ So Flake’s game all along was to give himself political cover and secure himself a cushy post-Senate career…

Yep, tainted lettuce can kill you, but the gov’t don’t care
Reveal
… At least 210 people in 36 states were sickened. Five died and 27 suffered kidney failure. The same strain of E. coli that sickened them was detected in a Yuma canal used to irrigate some crops.
… Growers aren’t required to test their irrigation water for pathogens such as E. coli. As a result, contaminated water can end up on fruits and vegetables.
.. Congress in 2011 ordered a fix, and produce growers this year would have begun testing their water under rules crafted by the Obama administration’s Food and Drug Administration.
… But the FDA – responding to pressure from the farm industry and Trump’s order to eliminate regulations – shelved the water-testing rules for at least four years.

Government for and by millionaires
The Guardian
— A new book explores this theme: Millionaires make up less than 3% of the US general public, but have unified majority control of all three branches of the federal government. Working-class Americans, on the other hand, make up about half of the country. But they have never held more than 2% of the seats in any Congress since the nation was founded.

Judge protects 300,000 immigrants from so-called President
Courthouse News Service
… found strong evidence that the administration pulled temporary protected status for citizens of those countries due to racism toward nonwhite immigrants, and did so without explaining its rationale. “The issues are at least serious enough to preserve the status quo.”

THE BIG HACK
How China Used a Tiny Chip to Infiltrate U.S. Companies
Bloomberg
… Nested on the servers’ motherboards, the testers found a tiny microchip, not much bigger than a grain of rice, that wasn’t part of the boards’ original design. Amazon reported the discovery to U.S. authorities, sending a shudder through the intelligence community. Elemental’s servers could be found in Department of Defense data centers, the CIA’s drone operations, and the onboard networks of Navy warships ….
… investigators found that the chips had been inserted at factories run by manufacturing subcontractors in China.
… The chips had been inserted during the manufacturing process, two officials say, by operatives from a unit of the People’s Liberation Army.  China’s spies appear to have found a perfect conduit for the most significant supply chain attack known to have been carried out against American companies.
√ But it’s soooo much cheaper to buy shit from China ….

Yale roommate: Kavanaugh lied
The Hill
— Supreme Court nominee Brett Kavanaugh’s freshman-year roommate is accusing Kavanaugh of lying under oath about his college drinking habits.
— Jamie Roche, who shared a dorm with Kavanaugh at Yale, penned an op-ed for Slate in which he said Kavanaugh “baldly” lied under oath “without hesitation or reservation.”
— “His willingness to lie to avoid embarrassment throws doubt on his denials about the larger questions of sexual assault,” Roche wrote.

“I saw him when he arrived at home regularly and I saw him in the morning.  And I can tell you that he would come home and he was incoherent, stumbling.”

“He would sometimes be singing,” Roche continued. “He would throw up.  And then in the morning would have a lot of trouble getting out of bed. … I saw him both what I would consider black out drunk and also dealing the repercussions of that in the morning.”
— former roommate Jamie Roche

So they say…
High school cheerleader gave out magic brownies
in bid to win homecoming queen…
Fox News
(The tip came from OK2SAY, which is a government app that allows students to confidentially report on potential harm or criminal activities directed at students, employees, and schools.)

Yeah, sure, Amazon raised wages, but …
… hourly workers lose bonuses …
CNBC
— Amazon confirmed in an email to CNBC that the company is getting rid of incentive pay and stock option awards as it increases the minimum wage to $15 per hour. The company, however, stressed that the wage increase “more than compensates” for the loss in other benefits.