√ The Mercer/Bannon plan is working. They are managing to sow distrust of government far and wide. In the case of the current administration, that distrust is surely deserved. But the affects may linger for … maybe generations.

N. Korea building missiles capable of hitting US
Vice News
√ Just a few weeks ago, Americans were told N. Korea is “no longer a threat.”
— U.S. intelligence officials believe that North Korea is constructing new intercontinental ballistic missiles capable of reaching the mainland United States, according to a bombshell report by the Washington Post.
— Published Monday, the report claims that U.S. spy agencies have seen evidence that the regime is developing one or two new liquid-fueled intercontinental-range ballistic missiles (ICBM) at a factory outside Pyongyang, similar to the Hwasong 15, which was first tested last November.
— Sources speaking to the Diplomat claim that the development of at least one of those new missiles began after the Singapore summit of between North Korean leader Kim Jong Un and President Donald Trump on June 12.

How legal pot made things worse for sick folks in Oregon
The Guardian
— The medical marijuana market is in a downward spiral as businesses, lured by big money, shift to recreational.

— Larry Kudlow, talk show jackass and top economic adviser to the illegitimate president: “Even the CBO numbers show now that the entire $1.5 trillion tax cut is virtually paid for by higher revenues and better nominal GDP.”
…
“I am quite familiar with the CBO analysis and have no clue what Larry Kudlow is talking about,” said Alan Auerbach, an economist at the University of California Berkeley and a member of CBO’s board of economic advisers.

Treasury dude: Let’s cut taxes by $100 billion for the wealthy
NY Times
√ Proving that the rich never get tired of winning, and this government never tires of figuring out how to shovel money at them.
— The illegitimate Trump administration is considering bypassing Congress to grant a $100 billion tax cut mainly to the wealthy, a legally tenuous maneuver that would cut capital gains taxation and fulfill a long-held ambition of many investors and conservatives.
— Steven Mnuchin, the so-called Treasury secretary, said in an interview on the sidelines of the Group of 20 summit meeting in Argentina this month that his department was studying whether it could use its regulatory powers to allow Americans to account for inflation in determining capital gains tax liabilities. The Treasury Department could change the definition of “cost” for calculating capital gains, allowing taxpayers to adjust the initial value of an asset, such as a home or a share of stock, for inflation when it sells.

Koch brothers a “total joke”
Reuters
— Donald Trump, president of the Electoral College, claims: ” I never sought their support because I don’t need their money or bad ideas.” 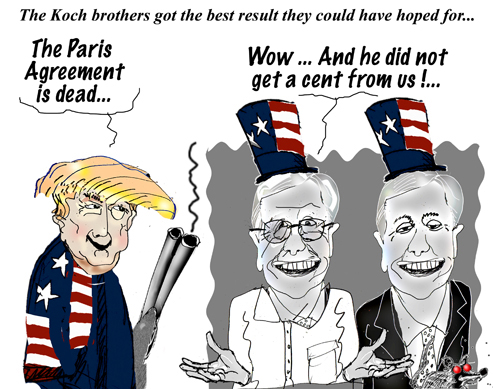 The perfect storm of factors making wildfires harder to control
The Conversation
— Fire seasons are growing longer in the United States and worldwide. According to the Forest Service, climate change has expanded the wildfire season by an average of 78 days per year since 1970.
— What is driving this trend? Many factors have come together to create a perfect storm. They include climate change, past forest and fire management practices, housing development, increased focus on community protection and the professionalization of wildfire management.

New Jersey taxpayers to fund local journalism?
NY Times
— The state’s lawmakers have embarked on a novel experiment to address a local news crisis: putting up millions of dollars in the state’s most recent budget to pay for community journalism. While public television and radio stations have long received government funds, new media experts like Kelly McBride of the Poynter Institute say they have not heard of any other efforts on this scale, with a state helping to pay for reporting projects among a range of news media, including for-profit outlets.
— The legislation sets aside $5 million from the sale of old public television licenses, creating a nonprofit consortium that would fund reporting projects and bolster civic engagement.
— “It’s not about saving journalism in New Jersey,” said Mike Rispoli, state director for the Free Press Action Fund, an advocacy group that was a leading proponent of the legislation. “It’s about making sure our communities are engaged and informed.”

Bezos’ parents long-ago investment in Amazon may be worth $29 billion
Newser
“… may be the most successful venture investment of all time.” The couple kicked $245,573 into Jeff Bezos’ nascent Amazon.com in 1995. What has happened since is all a bit speculative, but …

— Steyer’s oversize role stands to position him squarely against Democratic Party leadership, which has shown little appetite this fall for pursuing one of his signature causes: impeachment.
— Unlike the $80 million being spent by Michael Bloomberg, Steyer will put his cash toward building out NextGen America and Need to Impeach, his two growing political organizations, as well as funding clean-energy ballot initiatives in Arizona and Nevada. Steyer has already doubled his initial $20 million investment in Need to Impeach to $40 million and has not ruled out adding more.

Gulf of Alaska cod are disappearing: blame The Blob
NPR
For years, Alaska fishermen have worried that climate change would threaten their livelihoods. Now it has. The cod population in the Gulf of Alaska is at its lowest level on record. The culprit is a warm water mass called “the blob” that churned in the Pacific Ocean between 2013 and 2017.

Police kill Colorado man in his own home, moments after he killed an intruder
USA Today

> Rand Paul reverses on threat to vote no on Supreme
The Guardian
√ The Guardian fell for this one, folks. Rand Paul’s a political extortionist, using the threat of a “no” vote as leverage in some slimy deal or the other.