RealNews.Ink … trying to get a peek behind the massive wall of bullshit that America puts up every day …

OH, THE DOG AND PONY SHOWS

“Promising war by tweet, insults not only the Constitution but every soldier who puts their life on the line.”
— Sen. Rand Paul

Ryan, having delivered tax cuts to the wealthy, is done in Congress
Politico
Spewing the “more time with my family” crap
Ryan called GOP leaders personally on Wednesday morning to tell them the news. He said he felt in his heart he needed to be with his kids and that he could not in good conscience run for reelection when he planned to leave after the election, according to a source familiar with the conversations.

Zuckerberg’s data revealed after personal privacy fail
Vice News
— Mark Zuckerberg’s private cheat sheet for today’s Senate hearing wound up online after the Facebook CEO failed to use the proper settings to protect his private data from public eyes.
— An Associated Press photographer caught a photo of Zuckerberg’s notes, which he left open on his desk, revealing perhaps more than he had intended to put out there, but what was, at the same time, information he willingly revealed by not actively covering it.
— Among the dozen-odd topics listed on his cheat sheet were: what to say if he was asked about resigning, six bullet points to hit when the topic of Cambridge Analytica came up, and a line to use if anyone attacked the company. (It was: “Respectfully, I reject that. Not who we are.)

The Senate is afraid to govern —
that’s great news for Facebook
The Intercept
Far too many senators framed the problems with Facebook — as something for Zuckerberg to fix, and then tell Congress about later.

It’s not really about Facebook;
it’s the corporate capture of America
Motherboard
— Our total system failure enabled Facebook, which in turn enabled Cambridge Analytica, but it has also enabled Google, Apple, Amazon, and Uber, which have all been working on their own forms of regulatory and legislative capture at the local, state, and national levels. Google has spent record sums on lobbying. Apple is lobbying against pro-consumer right to repair legislation at a state level and often hides behind trade groups to do its lobbying work. Amazon has risen to prominence with government subsidies and is currently holding a local government handout sweepstakes to choose the location of its next headquarters. Uber ignores local regulations, then gets laws rewritten when it is sanctioned.
— The same systemic failures have allowed Verizon, Comcast, and AT&T to steal net neutrality from us, corner ISP markets around the country, and entrench their monopolies with lobbyist-written legislation passed by the lawmakers they donate to. The system that allowed Shell, BP, and Exxon to destroy our planet also allowed Morgan Stanley, Bank of America, Goldman Sachs, Lehman Brothers, and other financial institution to wreck the global economy. It’s allowed gun manufacturers and the National Rifle Association to kill any meaningful gun control reform.

The law that made Facebook what it is today
The Conversation
This is not actually a news story, but will help some folks catch up on the unintended consequences of a law Congress passed in the 1990s.

Comey, in TV interview, compares Trump to mob boss
Axios
… Comey’s comments, in his first interview since being fired by President Trump last May, will generate headlines and “certainly add more meat to the charges swirling around Trump.”

Los Angeles proposes paying property owners
to house the homeless in their backyards
LA Times
— Rents under the county’s pilot program would be covered by low-income vouchers, with tenants contributing 30% of their incomes. The county is also sponsoring a design competition, streamlining permits and providing technical aid and financing options.

All it takes to stop a bad guy with a gun is a good teacher with a … oh, let’s let local resident Mike Bacon have his say:
“A bat in every room? What? Are we hoping after that brave teacher takes a couple bullets that they have enough adrenaline to knock out the shooter before they die? And just wait until an unruly student grabs one of those bats and beats a teacher or another student with it.”
>>>Parkland school district rejects arming teachers CBS News

Border troop deployment plan hits a wall —
and it’s not Trump’s wall
Stars & Stripes
This National Guard at the border thing is looking like a crude and wasteful stunt
— As plans neared the one-week mark since Trump’s directive for states to deploy the troops to the border, much confusion remained. The troops’ mission, the number of states participating, timing and costs remain unclear.

Russian TV plays up US threat with bomb shelter tips
Moscow Times
— A Vesti-24 anchor recommended for viewers to stock up on “fewer sweets and more water,” in a segment on emergency survival foods that aired on Tuesday.
— “It should be noted that real panic isn’t here but across the ocean,” he added, saying bomb shelter sales “took off” in the U.S. after Donald Trump’s election as president in 2016.
— The newscaster went on to list the shelf life of canned goods and staples that included rice, oatmeal, and sugar “for those who succumb to panic and decide to spend all their savings.” 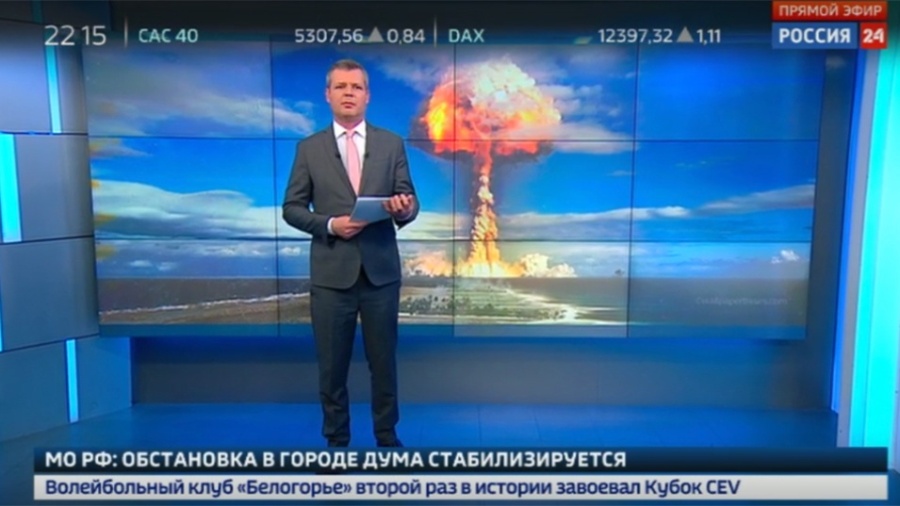