TODAY’S DOG AND PONY SHOWS
Feds announce that Iranians
hacked thousands of US academics
Gee, maybe setting the stage for some kind of “get tough” move against Iran??? Ya think???  This just happens to coincide with superhawk Bolton’s arrival on scene.
Gosh!
Ah, the stagecraft in DC!
And…
>>>”You know, a government shutdown might provide a bit of distraction from other stuff. just sayin. ” >>>
— Charlie Sykes on Twitter

Putin won, but Russia is losing
Ian Bremmer in Time
— Putin should enjoy his victory celebration while it lasts. He and his country don’t have much else on the horizon.
>>> How Russia’s gangsters evolved into a criminal elite
The Guardian
A long, but enlightening, read.
The challenge posed by Russian organised crime is a formidable one – and not just at home. Across the world, it trafficks drugs and people, arms insurgents and gangsters, and peddles every type of criminal service, from money laundering to computer hacking. For all that, much of the rest of the world remains willing to launder these gangsters’ cash and sell them expensive penthouse apartments.

We’ll believe it when it happens
States look to hold Facebook accountable
Vice News
“… if we uncover the fact that Facebook failed to adequately protect your information and allowed… someone literally to go into the warehouse, take the information and leave, because they gave them the keys, there can be severe penalties…”

Four bumps in the road for (chickenhawk) John Bolton
The National Interest
— It is hard not to know John Bolton’s views. All one has to do is to turn on Fox News in order to know that he is hawkish on North Korea, hawkish on Iran, hawkish on terrorism and a strong supporter of Israel. He will not change those views when he moves into his West Wing office.
— Four factors will determine whether he will succeed as National Security Adviser.
>>> On the horizon with Bolton<<<
Axios
> In May  Trump will likely follow through on his instincts and effectively terminate the Iran deal, bringing back heavy sanctions on Tehran.
> The proposed summit with Kim Jong-Un — already an uncertain proposition — appears even more shaky. Bolton has an uncompromising attitude towards North Korea, and believes the only language Kim understands is the threat of military force.
>>>”The largest funder of John Bolton’s super PAC is Robert Mercer, co-founder of Cambridge Analytica.”>>> Scott Dworkin on Twitter

Craigslist, in fear of liability, drops its personals ads
Motherboard
— Craigslist announced early Friday morning that it would no longer host personal ads of any kind, in response to a bill that’s meant to curb sex trafficking.
— Wednesday, the Senate voted overwhelmingly to pass a bill mashup of the Fight Online Sex Trafficking Act (FOSTA) and the Stop Enabling Sex Traffickers Act (SESTA). The bill will make websites like Craigslist, as well as social networks like Facebook and Twitter, more liable for what their users say and do on their platforms.

“We can’t take such risk without jeopardizing all our other services, so we are regretfully taking craigslist personals offline. Hopefully we can bring them back some day. To the millions of spouses, partners, and couples who met through craigslist, we wish you every happiness!”

“Best flight delay ever” on United worth $10,000
Newser
“On the upside, I wasn’t physically dragged off the plane and my dog wasn’t killed on board, so I’ve got that going for me…”
— Bumped flier Allison Preiss

Palm trees marching northward
Earther
Expect them to reach the White House lawn any day now. And then … Canada!
Windmill palms have recently been found in the forests of southern Switzerland—the foothills of the Alps—after one such decorative palm escaped and spread “simply because frost is not as prevalent as it used to be.”

MIT device said to extract water from air, even in deserts
Newsweek
Massachusetts Institute of Technology researchers have created a concept device that can extract moisture from the air and turn it into drinking water, even in the driest places on Earth, potentially providing a solution to the problem of water scarcity in arid climates.

Greyhound passengers freak out as driver keeps falling asleep
CBS-Dallas
— “We would go over the white line and everybody would be like wake up and she had tweezers she was poking herself with tweezers to keep herself awake it was awful. It got to the point where we had to raise our voice pull over we have children on this bus pull over.” 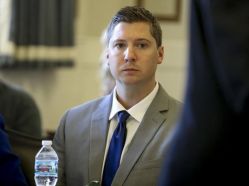 — Former University of Cincinnati Police officer Raymond Tensing, who killed an unarmed black motorist during an off-campus traffic stop, received a settlement from the university worth almost $350,000.
(At right, Tensing during his 2017 trial.)

Pissing off parents mightily…
Revenge of the administrators!
School district declares the four-day week
USA Today
The new schedule follows the district’s six failed attempts to get more money through bond elections. With the new change, Fiedler said they hope to save around $1 million in three key areas. By not running school buses on the days with no classes, the district estimates to save around $700,000