You’ve had it with Trump/Russia, right?
Here’s the other stuff….

Third-graders in a Missouri community are continuing to sell raffle tickets for an AR-15 to benefit their traveling baseball team after the same type of rifle was used to slaughter and injure dozens at a Florida school.

Levi Patterson, the coach of a 9-and-under baseball team in Neosho, Mo., told The Star the idea was conceived before the shooting in Parkland, Fla.

A father of one of the players — who co-founded Black Rain Ordnance Inc., a weapons purveyor in Neosho — offered the weapon for the raffle.

Patterson said by phone Saturday that he considered finding a different raffle item after Wednesday’s mass shooting at Marjory Stoneman Douglas High School, but ultimately decided to “turn it into a positive thing” after “getting the hate.”

…. Lee Woodward, the principal of South Elementary School in Neosho, announced the raffle on her Facebook page and encouraged purchases to support the “9u Neosho baseball players, coaches, and parents.” The post was made hours after the Florida shooting.

That’s the conclusion of a nine-month investigation by POLITICO, which found that workers are so lightly protected that six states have no investigators to handle minimum-wage violations, while 26 additional states have fewer than 10 investigators. Given the widespread nature of wage theft and the dearth of resources to combat it, most cases go unreported. Thus, an estimated $15 billion in desperately needed income for workers with lowest wages goes instead into the pockets of shady bosses.

But even those workers who are able to brave the system and win — to get states to order their bosses to pay them what they’re owed — confront a further barrier: Fully 41 percent of the wages that employers are ordered to pay back to their workers aren’t recovered, according to a POLITICO survey of 15 states.

Passengers hide in their rooms as fights break out
on the “cruise from hell.”
The Daily Mail

People vacationing on a Carnival cruise ship this week in the South Pacific had their trip turned upside down thanks to a series of violent brawls that seemed to transform the ship from a paradise into a fight club.

The Carnival Legend was forced to escort several guests off the ship and place them on a smaller boat ahead of the boat’s docking in Australia on Saturday.

Several fights broke out over the 10-day cruise, including two captured on camera showing guests throwing punches on a pool deck and a ship nightclub.

Big donor says no more cash for GOP until it modifies gun stance
Raw Story
“For how many years now have we been doing this — having these experiences of terrorism, mass killings — and how many years has it been that nothing’s been done?” Ambassador Al Hoffman told The New York Times. “It’s the end of the road for me.”

Hoffman once served as the finance chair of the Republican National Committee.

“I will not write another check unless they all support a ban on assault weapons,” he promised. “Enough is enough!”

Joshua Hayden had his jaw “shattered” by a kangaroo while he was out hunting the animals for food on Tuesday night. And the 19-year-old thinks kangaroos are getting meaner.

Hayden and his brother, who say they regularly hunt kangaroos for food, came across three of them while out hunting in a paddock near Kellerberrin, 202km east of Perth. One of the kangaroos vanished out of sight, he told the ABC, so he took aim at the remaining two.

He said one of the kangaroos disappeared and, as he stuck his body out of the window to have a shot at the other two, the kangaroo launched itself at the moving car. 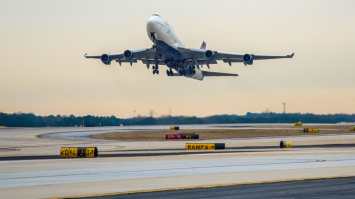 No US-based airline will fly the 747 now.

While the sheer size of the 747 is its most famous attribute, that wasn’t primarily why the 747 that attracted many of the world’s airlines. Many bought jumbo 747s because of their incredible endurance.

The iconic jumbo jet has been fading since the late 1990s. The global 747 fleet peaked at more than 1,000 in 1998. That’s when smaller twin-engine jets like the Boeing 777 really began filling fleets. It could fly just as far, and airlines didn’t have to worry about filling all the seats.

Nashville Post
… the prospects for an orderly refinancing — Gibson has hired investment bank Jefferies to help with that — look slim, observers say. And the alternative scenarios look likely to sideline longtime owner and CEO Henry Juszkiewicz.

“At the end of the day, someone will take control of this company — be it the debtors or the bondholders,” Debtwire reporter Reshmi Basu told the Post this week. “This has been a long time coming.”

One thought on “Sunday stroll thru the news”