> Paul Manafort and his former business associate Rick Gates were told to surrender to federal authorities Monday morning, the first charges in a special counsel investigation, according to a person involved in the case.
> Mr. Gates is a longtime protégé and junior partner of Mr. Manafort. His name appears on documents linked to companies that Mr. Manafort’s firm set up in Cyprus to receive payments from politicians and businesspeople in Eastern Europe, records reviewed by The New York Times show.

>Paul Manafort, who has turned himself in, and Rick Gates, who has yet to turn himself in, are expected to be processed separately, according to a law enforcement official.
> Processing typically takes an hour and includes getting photographed and finger printed.
> The two will be transported to federal district court in Washington later this morning.

Read the inducement here (download from Department of Justice)

“CORRUPT Mueller goes after Paul Manafort on FAKE charges?… to cover up for these Obama-Hillary-DNC CRIMES” — True News Network

“Is it possible President Moron is watching Fox and therefore hasn’t heard about Manafort?” — Greg Olear 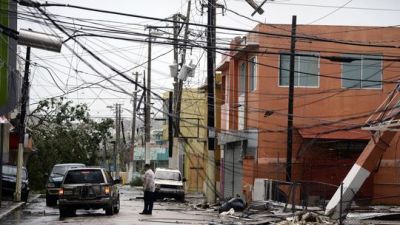 Gov. Rosselló urged the immediate end of an agreement between PREPA, and Whitefish Energy, a two-year-old company whose selection for a no-bid contract worth hundreds of millions of dollars has drawn intense political scrutiny.
Earlier this month, The Washington Post reported that Whitefish had previously employed the son of Interior Secretary Ryan Zinke and that the company was selected despite having no experience in large-scale electrical repairs and with only two full-time employees. The company has subcontracted out its work on the island.
Zinke on Friday said he had “absolutely nothing to do” with the awarding of the contract to Whitefish, which is from his hometown. “Any attempts by the dishonest media or political operatives to tie me to awarding or influencing any contract involving Whitefish are completely baseless. Only in elitist Washington, D.C., would being from a small town be considered a crime.”

From Snopes: without knowing the levels of arsenic behind that statement, it is impossible to determine if those levels are indeed unsafe.
Arsenic does have the potential to be toxic, but as the World Health Organization explains, it is “a natural component of the earth’s crust and is widely distributed throughout the environment in the air, water and land.”
The Clean Label Project, a nonprofit group that focuses on transparency in product labeling, conducted the study. They assert that they tested 530 baby products purchased within the past five months, and the New York Daily News reported that out of those products tested, “the study found that 65% contained arsenic, 36% had lead, 60% had BPA (industrial chemical bisphenol A) and 58% contained cadmium, a natural toxic metal typically found in plant soil and smoking products.”

The findings, published Friday in the Journal of Sexual Medicine, are based on an analysis of results from the National Survey of Family Growth, which asks respondents questions such as how many times they’ve had sex in the past four weeks and how often they’ve smoked marijuana over the past year.
Data on more than 50,000 Americans ages 25 to 45 were examined.
“Frequent marijuana use doesn’t seem to impair sexual motivation or performance. If anything, it’s associated with increased coital frequency,” said senior author Michael Eisenberg, an assistant professor of urology at the Stanford University School of Medicine.

Saudi women to be allowed into sports stadiums BBC
> Brave leadership drags Saudi Arabia into 15th Century.
> It’s been nearly two years since a woman was beheaded in public, so wow, yeah, progress!
Last month, a royal decree said that women would be allowed to drive for the first time from next June. Concerts are once again being held and cinemas are expected to return soon.

The schoolgirl’s tragic death raises serious questions about the use of child labour by the fashion industry.
China is recruiting an increasing number of – often very young – models from Russia and especially Siberia to work at catwalk shows.
It appears the girl did not go to hospital because she had not been provided with medical insurance despite being in China on a three month contract which involved her missing school back home in Perm, in the Urals.
Vlada Dzyuba was also described as suffering from ‘utter exhaustion’.
She had been recruited by a prominent Chinese modelling agency, it is understood.

Bible is fake news, Israeli newspaper Haaretz declares Newsweek
Some of us have already figured out that the Bible is not, and was never meant to be, literal history.  It must have been a slow week in the newsroom at Haaretz.

“No evidence of the events described in the Book of Genesis has ever been found. No city walls have been found at Jericho, from the appropriate era, that could have been toppled by Joshua or otherwise. The stone palace uncovered at the foot of Temple Mount in Jerusalem could attest that King David had been there; or it might belong to another era entirely, depending who you ask.”

Kurt Fowler has a Blue Cross Blue Shield PPO through his job, but he said he doesn’t know how much he will have to pay out of his own pocket for the care he is receiving. In an era of higher deductibles and limited choice of in-network doctors, however, he knows he could face significant medical bills.
His insurance card says his individual deductible is $5,000 and his coinsurance 20%. He said he didn’t know how much his health plan would cover for out-of-state care.
The total costs of medical care alone could reach into the tens of millions of dollars, said Garen Wintemute, who researches gun violence at the University of California-Davis.
And that is just the beginning. Many survivors will be out of work for months, if they are able to return at all.
“We really don’t have a good handle on the intangible costs of something like this … the ripple effects on family and friends and neighborhoods when a large number of people have been shot,